Since the age of thirteen, music has been a determining factor in my life. At first for pleasure, later on a professional basis. When I reached the age of forty my friend Hans van Druten advised me to practice Yoga for therapeutical purposes. I also happened to meet Yoga teacher Gerard van Wijk, who had just returned to the Netherlands, after spending three years as a monk in the Shivananda Ashram in Rishikesh, Northern India. 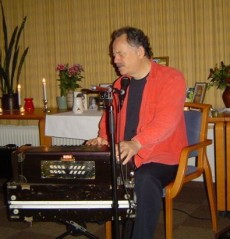 Apart from teaching Purna Yoga he also sang and played a Hindu organ (Bat) during relaxation. He had an impressive way of singing and when I asked him what it was he had been singing, he explained that it was a Sloka from the “Rig-Veda”. That was the first time I heard someone sing a mantra. You could feel that it had to do with concentration and transfer of energy through the voice. After practicing this different way of singing at home, Hans van Druten gave me the lyrics to an old Sanskrit psalm and suggested I make a recording of it so it could be used in one of his seminars. This particular seminar focused on physically experiencing music in order to locate traumas. This psalm was the Gayatri mantra. Subsequently, I studied sitar for four years to improve my understanding of Hindu music and culture and the Sanskrit language for one year to master correct pronunciation.